We looked at more pictures of seaweed and thought about how seaweed moved under the water.

We watched videos of seaweed moving underwater and listened to music of waves.

We used drama to act out being seaweed. We thought of spiky coral shapes and had to use our balance to hold these. We then thought of another coral spiky shape and held this again to balance a jagged pose for three seconds. We then recreated seaweed being pulled backwards and forwards in the currents, swaying backwards

and forwards. The seaweed then gets rolled  and tumbled by the waves. This was represented by the children lying on the floor and rolling backwards and forwards capturing this movement using drama. 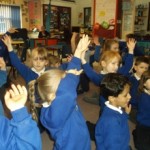 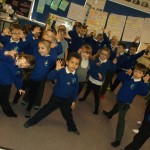