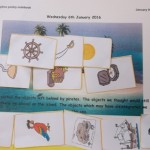 We worked in teams to sort objects into two groups. Objects which may still be around if they were found and objects which would have disintegrated?

We said the flag, map, sails and parrot would have disintegrated and objects made of harder materials, such as metal would still be around to find.